The lights are playing tricks with the camera, the beer is nowhere near that dark.

That pilsener I brewed a few months back, you remember the one? Yeah? Ok. Well somebody’s had it in the lagering keg in the fridge for a month, and somebody has been taking far too frequent samples. Somebody should write a short impartial review on their own beer wouldn’t your say?

It comes out of the keg fairly bright and a little pale despite the decoctions. Carbonation has been allowed to be higher than I usually pursue, but it works well with a pilsener. The whole thing is capped be a merengue-ish lofting head that demands to be allowed a minute to settle before it lets you top off your pint.

Aroma, this is the interesting bit. When rackiing into the keg I noticed it had a banana bread type aroma. Not the typical yeasty isoamyl acetate banana type thing, but a grandma’s kitchen banana bread…. er….. type thing. I think it is attributed to the floor malted pilsener malt and the pacific hallertau hops…. er… maybe. Anyhow those aromas have faded a little in the lagering phase, but I doubt they will dissapear.

Taste, as with most pilseners, follows the aroma pretty closely. Doughy, bready (little banana), grainy malt. It starts with a tinge of sweetness, then has the rush of continental malt, and finishes with an unusual hop character thats spicy, earthy, and has hints of lime-like tang (or at least thats how I get it, if I didnt read that as a descriptor of the hops than I doubt I would have come up with that). The mouthfeel is light, crisp and spritzy with the medium-highish level of carbonation, but it does have a small hint of fullness in the finish with a whisper of sweetness.

If I brew this again next year I think I’ll change the hopping rates for one, and give it a nice long vigorous boil in the decoction to drive those rich malliard reactions and give it a touch more color and malt complexity.

I really kind of like winter, but don’t tell anyone that. The countryside turns white, you can drink a bunch of eggnog, and us cheap bastards who rely on ambient tempuratures can lager! This year there will be no fooling around on my part, time to get serious.

Point of discussion, I learn well from mistakes, and there have been a few made in my last few lagers. One thing I found is that an anemic abreviated boil is a bad thing for pilsner malt, I’ve had 5 gallons of dimethyl sulfide infused popcorn beer before. After that I used plain 2-row, which wasn’t really a mistake, but my heart of hearts likes the tinge of sulfer that pils malt brings into play with some nice bottom fermenting yeasts (it’s what makes  me think ‘crisp and refreshing’). There are a few more, but I think I’ve embarrased myself enough. Now the plan! –

– 100% floor malted pils, I won’t mess with acid malt or water treatment. This will truly be a SMaSH.

– Speaking of water, the plan is to use water from my brewing friends house, lovely soft creek water.

– Hops: Pacific Hallertau. This is where the tradition stops, Pacific Hallertau, also called Pacifica I do believe, is an interesting hop. It has almost no real Hallerau flavor or aroma, it has a spicy and herbal bittering quality, but in aroma its pretty tropical. Straight out of the bag it smells like gummy bears, but the ammount of fruitiness that remains after fermentation is more on the bitter lime zest/earthy fruit that is the standard for southern hemisphere hops. Two additions-90 minute 4.5% AA to 15 IBUs, 20 minute 4.5% AA to 25 IBUs.

– Yeast: Budvar. Nice big starter that’s a little over a week old. I know budvar isn’t the most snobby interesting strain, but I still like it. This beer will be pulling double duty as a starter for a doppelbock me thinks (I like the name “don’t mess with gator”…. get it?)

The brew day went fairly decently, the main issue being that this malt (even though fully convered) never did vourlauf very clear, leading me to extend the mash for an extra 40 minutes. Despite the trouble I did get well above the %80 efficiency I was aiming for, so that was nice. Its sitting in the lager garage at 53*, time to play the waiting game… 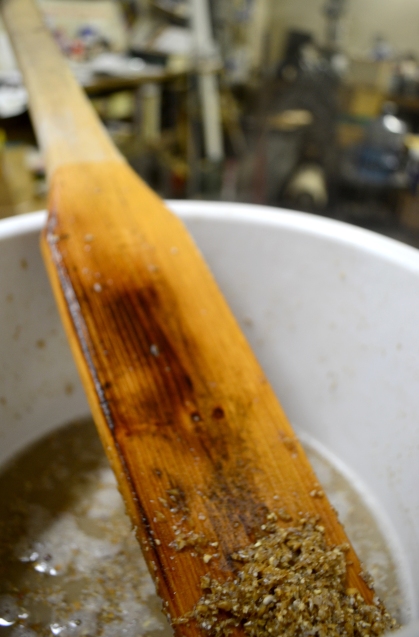